Well its been a very strange time this year hasnt it … I have on the one hand enjoyed having a bit more time to enjoy simple pleasures, but, on the other hand I have missed seeing my kids, and my grandbabies , and I have missed people coming in and out of the studio, students, tutors and general visitors…

anyway, I am planning to inch back to some semblance of normality and start to run a few classes, particularly those I can run outdoors … here are the words from the granary studio website……
I am planning to restart classes here at the Granary from the middle of July.. it won’t be all the classes I am afraid but where we can keep everyone safe, I will run the class.
We are currently rigging up an extension to the studio in the form of a gazebo …and where we can have classes completely outside, when the weather and the class permits… there will by necessity be some changes in order to be able to run the classes which are listed below … I shall start with the classes that can be run outside if possible , then look to start the full program of classes from the beginning of September.. I will contact all those booked on classes as we approach them to make decisions on viability
.. everything is subject to change of course …
I would please ask anyone due to attend a class to let me know if you are ill in anyway, this virus seems to have a vast array of signs and symptoms , this of course means there may be last minute spaces so do keep an eye on the website for details
Meanwhile, I am contacting tutors to rebook classes and will hopefully have the new program and leaflet out before the main restart in September

I will have anti bac wipes in the bathroom, and hand gel for each student.
There will be masks available when appropriate ..
I will endeavour to keep a 2 metre space between chairs even though Boris has dropped it to 1 metre
I will have the tea urn boiing but each student should bring their own mug and drinks as well as lunch..
I am afraid the class biscuit tin will be temporarily suspended…
Lunch may have to be at the workspace but wherever possible we will take lunch outdoors
Hopefully we will all be fine, we all have loads of common sense and with a bit of luck things will return to some sort of normal before long

Hi everyone, I do hope you are all staying safe in these troubled and unprecedented times. Since the lockdown was enforced I have had many messages from all over the world saying how difficult it is to do anything creative, how the lack of stimulus and challenge is preventing you from doing anything meaningful and all are suffering from a lack of concentration. The only thing I can say is that everyone is feeling the same way 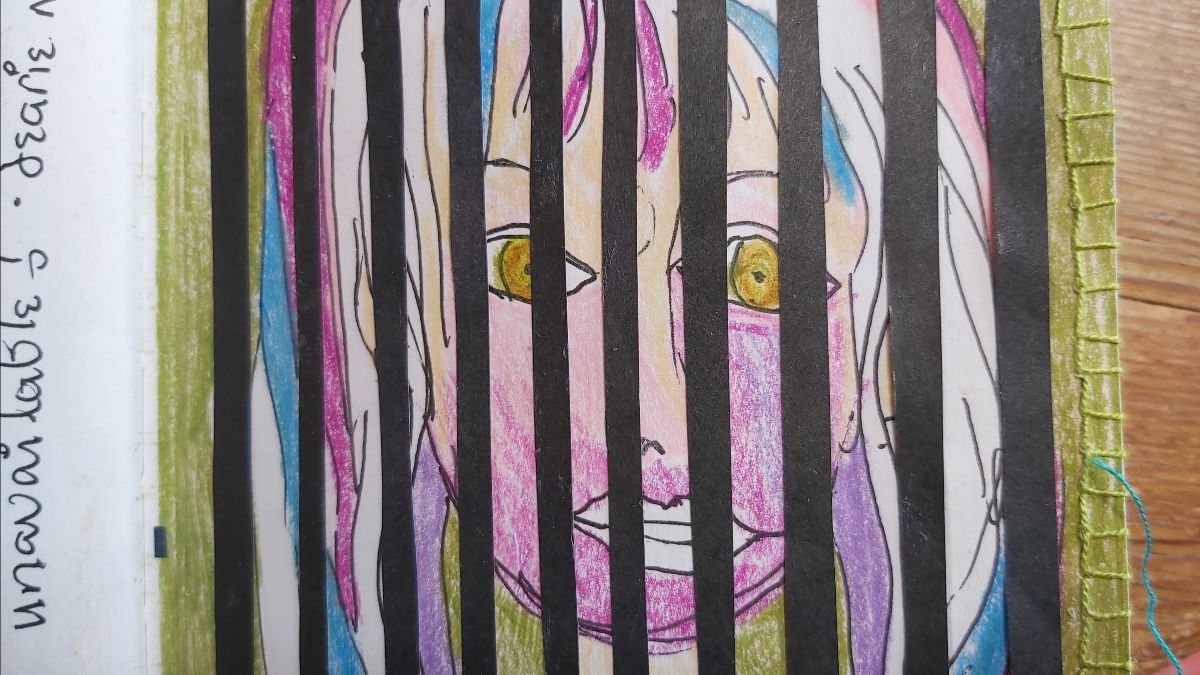 The only thing I can say is that nearly everyone feels the same way, but it will pass. For various reasons I am in my fifth week of lockdown and after the first couple of weeks I started to relax into it, get more focus, and am now quite enjoying the work I am doing …. the important thing is to keep doing something, this is one image from my isolation sketchbook, this is my current daiiy practice and it is really interesting to see the change in me as the weeks go past…

So,what to do about this… my isolation book now has images like these I am relieved to say, but if you feel as though you would like some direction, support, whatever, through these weeks I have a challenge for those who would like to take part. A few of you will already have started a challenge with me this way before, but this is intended to be a bit more structured, and I do think there is no harm in re-visiting a starting point.
This will be a series of sessions with time in between to complete the tasks, possibly once a week and we will see where we go with it. This is a new exercise for me, so, hopefully you can send me information that I can share with the whole group.. no pressure to complete, maybe just an investigation to keep your mind occupied. If you fancy having a go, with an optional exhibition at the end of it , possibly next year, I would like you to email me on susichap@hotmail.co.uk please, and I will set up a group for those that wish to take part

As well as the longer courses that I teach at the Granary Studio, I am now offering some short, dayschools. In response to requests from my followers, I have titled the series Dayschool Fridays., which just means that they all occur on Fridays, you can book onto just one, or you can book them all, no problem!

If you would like to see something else offered, please do let me know, then I can either teach it, or get a tutor who can. Hope there is something you can find to do in this list.

I am still getting all the information pages together, but I wanted to tell you about this venture before the festival of quilts so you get a chance to book onto your choice of days.. when the course code is blue, click on it and you will go to the information sheet, I am still workingon any that are not so please come back later

£50 a session to include most materials

Each session is bookable independently

I hope everyone had a very Merry Christmas, mine was different this year, I went to my daughter’s house, she has a new baby and my son in law was cooking so we all converged in Uttoxeter … wonderful to hand over the cooking …

I have just posted some new classes on my granary website .. do visit .. hopefully there wil be some classes that interest you    www.granarystudio.com

I am running a drawing course at Eastleigh college which finishes at the end of this term and working a little with theyoung students too, but I am cuting back on hours there … don’t forget the HNC Contemporary Art Practice, I will teach on that if it runs.. we still have the names from last year so hopefully it will … if not, then my time at Eastleigh College may draw to a close after 15 years!

I hope to see you there or at the shows, I will be at ICHF shows in Glasgow and Birmingham, back to back in March.. and at Festival of Quilts in Birmingham in August, Hampshire Open Studios in Granary Studios in August too, then finally the  Autumn Knitting and Stitching shows, probably at all three .

A very Happy and Healthy New year to you all

Hi everyone, I am part of the tutor team for the HNC Contemporary Art Practice which is taught at the brand new Art school in  Eastleigh College … it will be starting at the end of September and you would study for two years part time for this qualification… it is a brod based course which includes painting and drawing, textiles, sculpture, photography, film and animation and printmaking.

At the beginning of the course for the first term, you would have a go at everything with workshops in all the studios .. from then onwards you work independently for your own exhibitions using which ever medium you prefer, we have tutors in all specialities to help you… I teach printmaking and textiles predominantly ….

Four of our graduates this year, are going onto university to study the rest of the units required for degrees/HND

We are interviewing for this coourse on Wednesday 6th September which is only next week… if you are interested then please contact me urgently, see my contact details elsewhere on this site,  or Kathy Messenger on 02380911004 at college… we need a couple more people to ensure that this course runs, we have a lot of fun and there is a lot of learning too .. do join us …

phew.. just back from two ICHF shows, only two weeks apart firstly ‘The Scottish Quilting Show’at the SECC in Glasgow and then the ‘Fashion and Embroidery Show’ at the NEC in Birmingham … I was so busy on the aproach to these shows I didnt get to post any information about them but do put the dates in your diaries for next year …..

They are actually back to back next year so that will be a test of packing and re-packing! I will be at both shows next year too

I had a large solo exhibition in Glasgow and I also taught some lovely ladies and gentlemen every day of the show …I taught my workshop ‘Explorng Simple Print’ using funky foam and polystyrene, and I think everyone had great fun, including me. The washing up was a bit of a challenge though with automatic taps in the loos until the lovely Jane Bolsover found me a catering sink .. she really is an amazing mover and shaker…

and all sorts of fun at the NEC two weeks later

this is my demonstrator stand and behind that the  ByDesign exhibition titled ‘Smoke and Mirrors’, here are a couple of views

Finally the third stand I was involved in was the Eastleigh College stand … this showed the work from last summers HNC end of first year interim show, four students who are textile based, from this course came with their work … and here are a couple of views

they are Shelly Canning, Me, Irene Belcher and Frances Davison, a great time was had by all … and , finally, all my family came on the sunday and helped take down … those who know us well know that it is quite rare for all of us to get together

that is me, Oli Son, Evelyn Daughter with Granddaughter on board who I ill hopefully meet at the end of June! and last but certainly not least Ben son-in-law

thats it, my whole dynasty so far….

Getting ready for the upcoming Festival of Quilts at the NEC in Birmingham.

I will be driving up to the courier near Gatwick tomorrow to take quilts for me, my students and friends .. so, if there is anyone else wanting me to take stuff you have the rest of today to get it to me!

Quilts are all finished, now starting to make up my teaching resources .. I will be teaching two half day workshops on the Friday and one on Sunday

I am teaching ‘Creative collage’ on Friday and Sunday, and ‘The Power of Print’ on Friday too..

So, we will both be runnin around, but if all our arrangements have gone to plan, there will always be one of us at the stand at least!

Welcome to my Blog

This is where you will find all my latest news

To keep up to date with all my lecture dates, exhibition dates and workshop dates, click on my diary.

My latest pieces of work are in the gallery.